The 2018 EU – China Tourism Year (ECTY) launch in Venice’s famous Doge’s Palace was met with massive media interest and coverage with dozens of news outlets reporting (download the press clippings here) as the year was officially opened by the Commissioner for Internal Market, Industry, Entrepreneurship and SMEs, Elżbieta Bieńkowska, the Bulgarian Minister of Tourism representing the Presidency of the Council of the European Union, Nikolina Angelkova, the Vice-Chairman of the CPPCC National Committee, Qi Xuchun, and the Vice-Chairman of the China National Tourism Administration, Du Jiang. The EU-China Tourism Year will consist of a number of cooperative marketing campaigns funded through public-private partnerships, business summits, and business-to-business meetings for tourism operators. 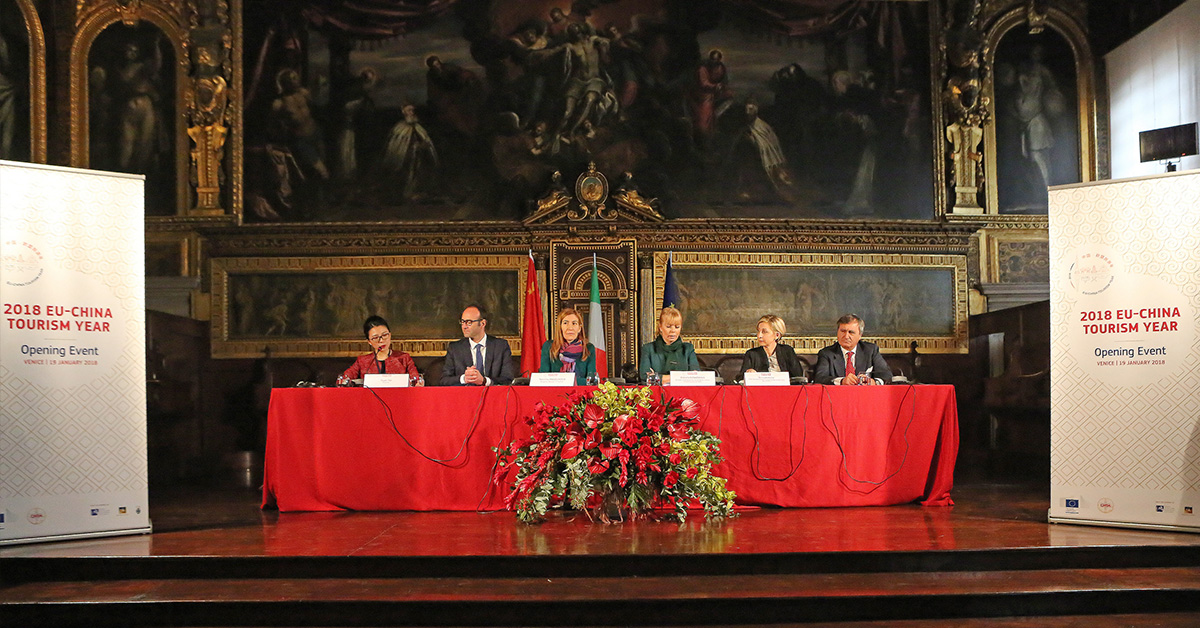 The 2018 EU-China Year promotion plan aims to make Europe the best global destination for Chinese tourists. To reach that goal it is essential to train European companies throughout the continent to give the best welcome to the Chinese traveler by understanding what he or she needs and wants. To achieve this the European Commission has created this collaborative promotion platform (ECTY).

“Initiatives like the EU-China Tourism Year are good for both the EU and China,” said Ms. Bienkowska. “We have common objectives for the Year: We both want to improve mutual understanding between European and Chinese peoples. We both want to encourage more Europeans and Chinese to visit, discover and appreciate each other’s places, cultures, and traditions. And we both want to stimulate new investment opportunities both in the European Union and China.”

There are a number of ways forward for the European tourism industry to create an atmosphere in which the Chinese tourist will feel more at ease, from offering hot water to drink, that being the preferred temperature for most Chinese families, to offering Chinese language television stations and high performance wifi as well as the payment methods favored by the Chinese such as UnionPay, the only credit card issuer in China, as well as WeChatPay and Alipay.

Mr. Zhan Shu, General Manager, Government Affairs & Tourism Center of Tencent declared: “The dialogue between Chinese tourism and European tourism is a dialogue between two ancient civilizations in modern society. Tourism is a bridge and culture is the cornerstone, and the routing of digital silk leads from one to the other. Through internet technology we can make more Chinese people feel the same convenience of life and wisdom in Europe as at home.