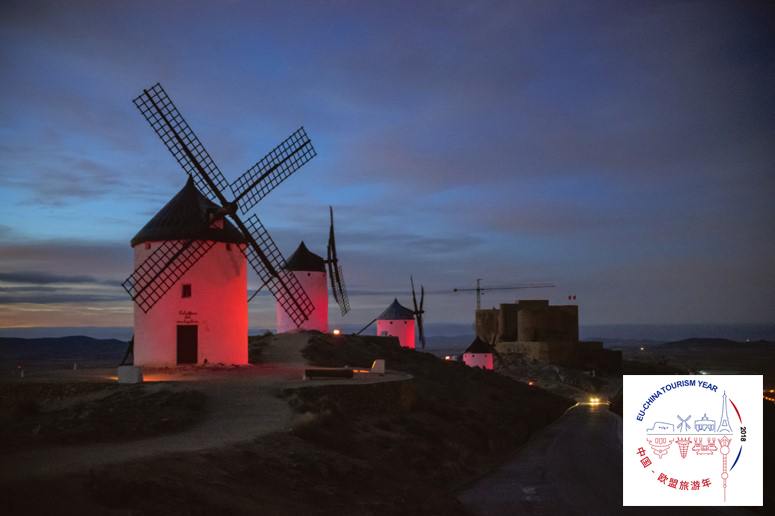 Somewhere in Castilla -La Mancha, in a place whose name is Consuegra, on the top of the Calderico hill, you can find one of the most impressive images of Spain, twelve windmills surround a massive fortress making an astonishing icon in your mind. A place, where merge history, culture and fiction.

The 12 Windmills of Consuegra were illuminated in red on February 15th to celebrate Chinese New Year and on March 3th as part of the Light Bright initiative.

There is no feeling like driving through the highway while breathing the region pure air when suddenly, the landscape changes. A great flat land like an endless skyline emerges in front of you and while you keep driving, you look again at that thin line where land and sky merge into one just to start noticing that in the distance twelve windmills and a marvellous castle the top of a hill crown the plain the top of a hill. You are arriving to a place of relevant history and heart of Spain, Castilla La Mancha at the town of Consuegra.

This is the place where Miguel de Cervantes inspired the most influential novel of the Spanish literature, “The Ingenious Nobleman Don Quixote of La Mancha”. Besides the well known first paragraph of this classic novel,the most relevant passage may be that one where thew main character, Don Quixote, mistakes these famous Windmills for giants deciding to careless fight them.

These windmills not only fed the people who lived in the area but also the imagination and inspiration of Cervantes as they will sure do to those visitors that decide to come to know this place . Here, while walking around enjoying the views, the visitor can feel like a wanderer knight, a humble peasant or a tough miller and will even feel like Don Quijote and his best friend Sancho could appear and salute at any time.This feeling is only possible here: Among the windmills of Consuegra in Castilla la Mancha, Spain.