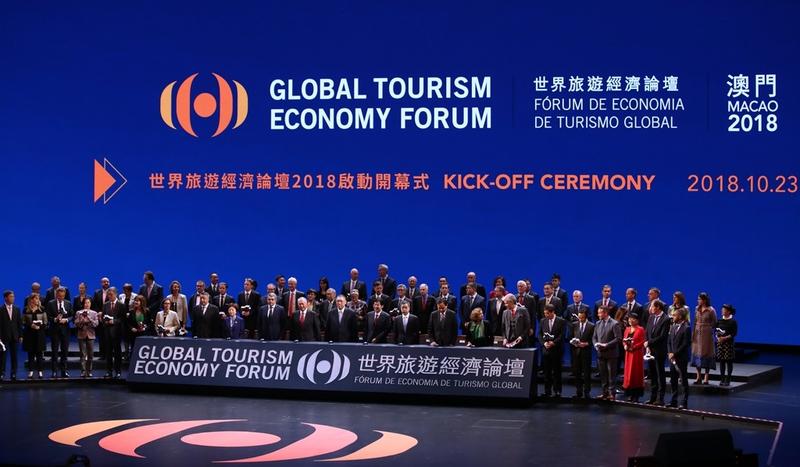 Attendees pose for a group photo during the opening ceremony of the 7th Global Tourism Economy Forum at MGM Theater, Macao, Oct 23, 2018.

On October 23rd and 24th the Global Tourism Economy Forum (GTEF) held its seventh edition in Macao and examined in depth the impact of the strategic tourism collaboration between the European Union (EU) and China in the 2018 EU-China Tourism Year (2018 ECTY). Boosting visitor numbers and investment in the EU and China was a major focus of the event in Macao.

As an official partner of 2018 ECTY, GTEF presented the European Union as an Official Partner Region to promote the EU’s immense collective tourism offerings to China, the fastest growing and number one source market in the world since 2014. The European Travel Commission (ETC) hosted and coordinated the participation of destinations from 10 countries (Austria, Belgium, Denmark, Finland, Italy, Norway, Poland, Portugal, Slovakia and Spain) in the ECTY Pavilion.

“The EU itself and China respectively are the two largest regions in terms of either the outbound travelling figures as well as the capability of welcoming travellers to those regions,” explained Pansy Ho, Vice Chairman and Secretary-General of GTEF.

“Both places have also gone through a really robust period of building up their very strong relations. I see that, in fact, the growth will continue.”

Eric Philippart, Special Counselor for the 2018 ECTY, explained the priorities as part of the partnership.

“The EU is negotiating on air connectivity, also visa facilitations. You know, now travellers want to have a faster, a fast travel,” he said.

“They want to have direct access to their destination. They are more and more impatient with paperwork. So, we are working on that on both sides.

The European Union appreciates the special contribution of Macao to the 2018 ECTY. It was the first to support the idea of an EU-China Light Bridge which eventually saw more than 100 landmarks in Europe and in China illuminated on symbolic nights.”

“The EU-China Tourism Year has been so far a great success. We worked hand in hand with the Chinese Ministry of Culture and Tourism to help concretely businesses and citizens on both sides.

We hope to continue our cooperation in 2019, building on the good results of 2018. We can do more to create better opportunities for investment and improve the business environment.

The European Union is blessed with a unique cultural diversity, exquisite nature and rich history. We are working at all levels to improve the experience of Chinese travellers, notably thanks to new digital tools and smart tourism. We therefore hope to see more Chinese travellers coming to discover European hidden gems.”